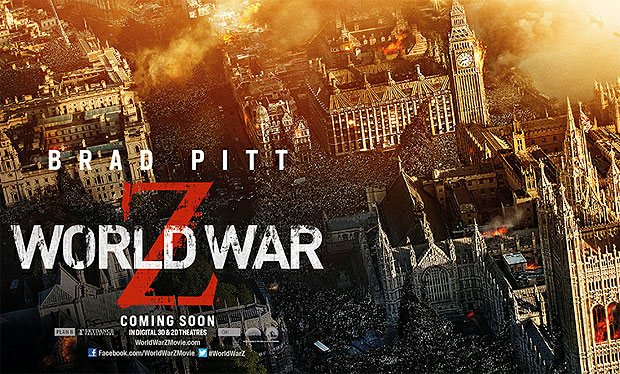 World War Z should really be called ‘The Movie About Globetrotting Around a Zombie-Infested Planet’ as it has little to do with the beloved Max Brooks novel. In fact, the best thing about the matinee performance I went to on Saturday, was a trailer for the BBC series Luther. Oh and one tine plot point towards the ending which went some way to redeeming the whole mess a tiny bit.

The story is a simple one. A virus turns people into zombies and Brad Pitt’s character has to go find a vaccine or at least where the virus originated. This sees him going from Philadelphia and Neward to North Korea to Jerusalem to … of all places … Wales. Oh and if he doesn’t go or dies, his family get tossed off a government boat to take their changes on the zombie-infested mainland. Nice.

Before we discuss the Pitt’s acting (it won’t take long, trust me), let’s talk about the zombies. In the book, Brooks’ infected burned slowly, taking days to turn, and then ambled along, attracted by noise. The problem came when they moaned and attracted friends and a pack could eventually become a megaswarm of millions.

This movie’s zombies go the same way as 28 Days Later’s rage-infected zombies. They’re unnaturally fast and more like ants than zombies. Like those infected, they also turned within seconds – twelve in this case. Getting blood in your mouth won’t turn you and if you’re bitten, removing the affected limb will save your life but only if you do it with whatever unsterile knife is handy and no anaesthetic before the allotted twelve seconds has passed.

While everyone who has read the best-selling book is rolling their eyes, this does work quite well is two key scenes: the first is an outbreak in Philidelphia where it’s hard to tell who is running because they’re terrified and who is running because they’ve turned. The second scene takes place in Jerusalem where Gerry Lane and the one character who made it from the book to film are viewing the massive walls which surround Israel when some idiot decides to play with a microphone and attracts the megaswarm who are loitering outside the walls. The ant comparison works perfectly and the infected quickly scale an impossibly high wall but it’s a beautiful sight: bodies covered in dirt and mud flinging themselves on each other to achieve a collective goal.

Brad Pitt is obviously the star of the movie and comes across as surprisingly normal. He’s the Everyman who also happens to know important people who can call you when the shit goes down. Gerry worked for the UN and so is the ideal person to find out where the zombie plague comes from.

The problem with this is, while that was the plots of the book, it was never about finding a cure. Gerry does this, of course, and it’s actually a nice little addition to an otherwise laughable movie. Watching zombies part like waves around a thin, bald woman is beautiful and lingers much longer than the actors’ collective skills.

Of course, the eventual vaccine is not a cure, just a something to win a little time until the next movie comes out. This concept is anathema to the book and a total invention of the Hollywood idea of “What’s better than one movie than a series? Nothing!” I’m both repelled and drawn to how badly Plan B are going to mangle Max Brooks’ world next. Will I go and see the next movie? Sure? Will I like it? Probably not.