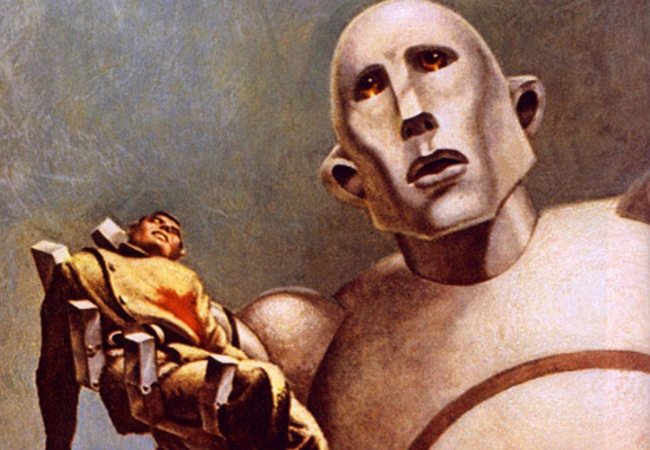 It’s one of Science Fiction’s classic tropes and has been responsible for some of the most beloved characters in the genre — robots.

Robots are almost pure design personified. The whole concept of a robot is a manufactured man, woman or creature. Everything about it has to be thought up and drawn out or sculpted. Aside from the occasional movie robot that has to accommodate an actor or operator, their are no constraints on the imagination when it comes to depicting the mechanical men and women that populate the landscape of SF.

As most people know the word robot comes from Carl Kapec’s 1920 Czech language play R.U.R., Although the concept of the mechanical or artificial person goes back further than that, Kapek’s derivation of the word robotnik quickly made its way into common usage. The robot is as ubiquitous a piece of science fiction tropism as rockets and ray guns.

Robot design can range from clunky to elegant, from steampunk to organic, from humanoid to nightmarish to microscopic. One of the most famous and iconic robots is Maria from Fritz Lang’s 1927 film Metropolis. She is sleek and sexy and, once she is given a coat of skin, she looks completely human and seduces the denizens of Metropolis into rioting and chaos

The October 1953 edition of Astounding Science Fiction featured an illustration by Frank Kelly Freas for Tom Godwin’s The Gulf Between. One of the most famous depictions of a robot a giant metal man cradles a human corpse in its hand. The expression on the robot’s face is one of grief and remorse. The image was so iconic that years later the members of the rock band Queen asked Freas to repaint the image except with the band members resting in the robot’s hand. In 1977 that artwork appeared on the cover of Queen’s album “News of the World”.

The June 1945 issue of Imagination Magazine featured an illustration for the feature story Slaves to the Metal Horde by Milton Lesser. This painting features a robot, presumably one of the metal horde, pulling up a reclining woman who is supine at the base of a dead tree. On a limb of the tree a man hangs from a noose. Presumably the humans are the aforementioned slaves. The robot masters, it seems, are no less averse to stringing up disobedient slaves than were historical slave-owners.

The robot itself is little more than a tin can with arms and legs and a pointy head, yet the lack of any features resembling a face makes the robot all the more frightening. There is no malice, no mercy or pity. It is merely a machine carrying out its objectives.

It is a pulp cover image through and through, though. On one level it is merely a typical pulp image of a robot manhandling a scantily clad woman, but there is more to it then that. It paints a frightening image of a bleak, apocalyptic future. That same theme would be explored again and again, most famously in the Terminator movies of the 80’s and 90’s

The 1956 film Forbidden Planet featured Robby, Doctor Morbius’ mechanical servant. Far from elegant, Robby’s appearance is clunky and slow-moving due to the necessity of having a human inside the costume. Nevertheless, Robby was the Iconic image of a robot for many years afterwards. Robby’s appearance influenced a number of other robots, notably the robot from the television series Lost in Space.

The Robby costume was reused in other features and appearances in television series right up to the present day.

Slightly less clunky, but still a man in a suit (the very slight Anthony Daniels), C3PO’s design owed much to Maria’s from decades before. The robots of the Star Wars films, however, showed an amazing variety in their designs. 3PO’s counterpart, R2D2 is as non-humanoid a robot as one can get, yet still the little droid has more personality than many of the human actors from the films.

The advent of CGI has allowed screen androids to get away from the “actor in a suit” look. The startling white robots with freakishly human faces in the movie I, Robot are probably the only outstanding thing about that particular motion picture. CGI robots allowed for the re-boot of the television show Battlestar Galactica to present elegant, chrome-plated cylons that were both elegant and deadly.

In the late 70’s and early 80’s a Japanese artist named Hajime Sorayama began painting a series of sexy, femaile-shaped robots. These were chrome pin-ups. His metallic organic forms became famous the world over and appeared in the pages of Playboy and Penthouse magazines and fostered a robotic army of imitators. Sorayama’s pin-ups were collected in a book Sexy Robot, published by Genko-sha in 1983 and Pin-up (Graphic-sha, 1984).

There are many different types of robots from the malevolent to the beautiful to the whimsical, From fully humanoid to vaguely humanoid to completely non anthropomorphic. From metallic and clunky to organic and elegant and even beautiful. It is ironic that depictions of robots, these soulless, mechanical creatures, can be as varied as the human imagination can make them.