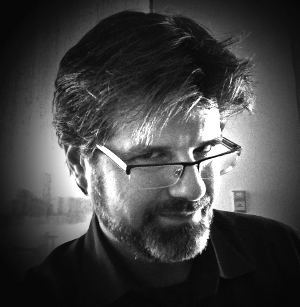 A newcomer to the Space Art community, Christopher Doll is combining his life-long love of Astronomy and Space Travel with the skills he learned as an Industrial Designer. “I’ve always been a compulsive sketch artist, drawing spacecraft and space scenes as far back as I can remember. All through college and well into my career as a User Experience Designer I would fill sketchbooks with these scenes, idly passing the time. I also became an accomplished model builder along the way, building spacecraft from movies and shows. Only recently did it occur to me that perhaps this was the calling that I ignored. Once I’d made the decision to pursue Space Art as a serious career I joined the IAAA and found the community to be a tremendous help. Not only was the IAAA welcoming to new faces, I found many of the artists I’d admired over the years participating in a variety of discussions with the rest of us. I consider myself quite fortunate to have found such a fantastic community.”

His work is split between traditional painting, acrylics and airbrush on canvas, as well as digital media. “As a designer in the software industry, I am quite proficient with Photoshop and even had in my possession a large Wacom art tablet that was mostly collecting dust. Learning to use it as an art canvas took a bit of effort, the biggest hurdle was overcoming the disconnect between drawing on the table while looking at the screen. I had the basics down, both in terms of using the software and in the practical aspects of drawing and painting. Had I not had a background in Industrial Design, from a college that pushed us to learn classical painting and drawing techniques, this would’ve been a much steeper hill to climb. Even now I avoid using digital tools’ shortcuts as much as possible, relying on brush strokes to define shapes and forms wherever possible.

It wasn’t until I finished a number of pieces with digital tools that I turned to brushes and canvas again. At first I was nervous, after all it was 20 years or so since the last time I’d painted anything other than scale model spacecraft. But once I got a canvas in front of me, my first painting sort of exploded out of me in about three hours. I guess it’s like riding a bicycle, you never really forget.”

Many of his pieces depict more fantastic images normally found in science fiction works, but many show his love of Astronomy and space exploration. “I grew up with the Moon Landings, the Apollo program. Space exploration was exciting. It still is, it’s in my blood as much today as then. I was given a small Kmart telescope when I was a kid growing up in Michigan, and I remember seeing Saturn and Jupiter while desperately trying to keep it from wobbling. It blew my mind back then, as much as it does today. Seeing these objects for yourself changes you, it makes them somehow more real. If nothing else I’d like to think that I could share some of that excitement through my art. Not everyone gets a chance to look through a telescope, especially not here in the rainy Pacific Northwest.”

Now in his second year as a Space Artist, Christopher Doll is still a full time User Experience Designer, but is looking to see where Space Art will take him next. “My first year was a giant exploration of the tools and techniques. I needed to build a body of work to see if this is really something that fits my personality as well as a test to show if my skills were adequate to the task. I’d consider it a resounding yes on the first count, and will let my audience decide if they like what they see. This year I had my first gallery showing, I’ve sold my first few pieces, and I’m working on getting my name out there. It’s an exciting time and I’m thrilled to be here.”

AmazingCon Update: We Have a T-Shirt and a Mascot!

The Sci-Fi Art of Paul Maitland