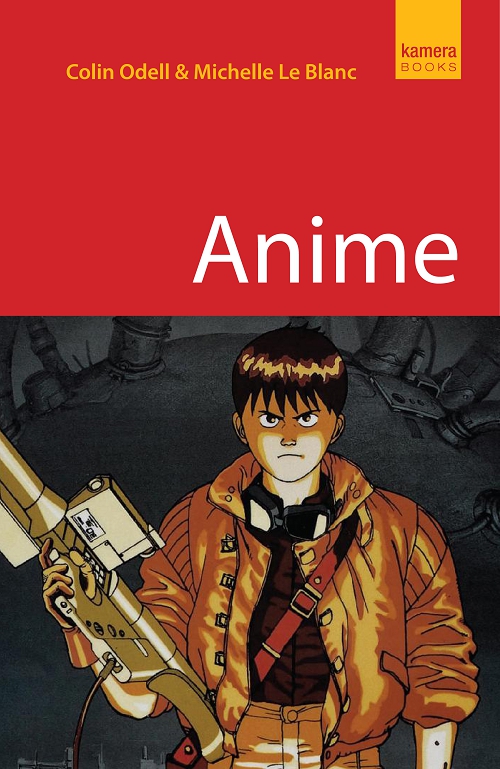 Colin Odell & Michelle Le Blanc are not just British film critics and genre fans who happened to have written Studio Ghibli: The Films of Hayao Miyazaki and Isao Takahata (the definitive English language work on the subject). They are dedicated Nipponophiles, visiting Japan, practicing Japanese martial arts and making their own sushi. I know this because I happen to know them personally; when they chose to write a book about Anime they do so from deep personal experience. Also the authors of books on Tim Burton, John Carpenter, Jackie Chan, David Lynch, as well as two volumes simply called Horror Films and Vampire Films, Odell and Le Blanc see more cinema than just about anyone. They bring a vast sense of perspective based on watching thousands of films from all around the world to their appreciation of the moving image.

At 160 pages, (with eight pages of beautifully produced colour stills) Anime is not intended as a definitive guide, but as wide ranging introduction to the field. Even so, seasoned anime watchers will  find the book valuable for the opinions expressed, and supposing you don’t agree with every opinion offered, its hard to argue those opinions aren’t well earned and insightful. What Odell and Le Blanc do in Anime is provide a guide through the form for the newcomer, and particularly the English language viewer. Thus the book begins with a 28 page introduction outlining the context of the development of anime as part of Japanese cinema, and its relationship with manga. The two words are often used interchangeably, but correctly manga describes printed works and anime, animations, whether made from the cinema, television, or produced for sale direct on video or DVD (such productions are known as OVA – Original Video Animation). The authors provide just enough information about Japanese culture to set the growth of anime, especially its great rise in popularity in the aftermath of the Second World War, into context. The introduction ends with a useful glossary of anime terminology.

Next there is a 22 page section called Key Anime Creators, with short biographies of ten of the most significant makers of anime, including Tezuka Osamu, Takahata Isao, Miyazaki Hayao, Kon Satoshi and Shinkai Makoto. After which the bulk of the book is taken up with A Selection of Anime (86 pages) a chronologically presented series of reviews, each about a page long, of many of the most significant and best anime. The selection begins with Momotaro the Undefeated (1928), before jumping to the post-war period and 1958’s The Tale of the White Serpent. 60s’ classics Astro Boy and Jungle Emperor (surely the progenitor of The Lion King) are covered before moving onto such landmark fare as Sazae-san (6000 episodes and counting!), Space Battleship Yamato, Mobile Suit Gundam and many more. Modern classics such as Ghost in the Shell, Whisper of the Heart and Neon Genesis Evangelion are covered, as well as, to casual viewers, much less well known titles including Jin-Roh: The Wolf Brigade, FLCL (Furi Kuri) and Chobits. From blockbusters like Spirited Away to the surreal Serial Experiments Lain and the controversial adult anime Urotsukidoji, the book covers the entire field, coming relatively up to date with Summer Wars (2009). And yes, inevitably, Akira gets to be the cover star.

Almost everything receives strong praise. Not because Odell and Le Blanc love all anime uncritically, but, rather than attempt to review everything, they have chosen examples of the very best and / or most historically significant animes in the development of the genre. They do not waste space discussing lesser works, not because they haven’t seen them – they probably have – but because the intention here is to provide a guide to the best anime has to offer. It is a fine place to begin an exploration of the art form, but be warned, so interesting and essential do the authors make the titles they describe sound that Anime may prove a much more expensive purchase than its cover price.

The book concludes with references, a further reading guide and an index. Anime is published as a B Format paperback on 29 August by Kamera Books in the UK for distribution worldwide. Price £16.99. ISBN13: 9781842435861*

Colin Odell and Michelle Le Blanc also edit the Kamera Film Salon, present film reviews on UK radio and have been published in many film journals including The International Film Guide and Alter Image.