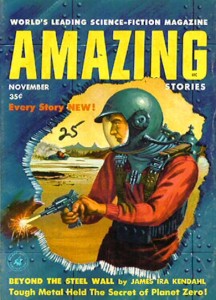 It sure does to me.  It’s the reason I worked on Apollo.

When President John F. Kennedy gave his “We choose to go to the Moon” speech at Rice University in Houston, Texas in September of 1962, he offered us a reason: “Because that goal will serve to organize and measure the best of our energies and skills”.  And so it did.

As I’ve noted elsewhere, I was just starting my sophomore year in college, and like many others my age I hastened to get on board.  I had had little enthusiasm for a career in technology before, but after JFK’s speech I switched my major to the new discipline of Aerospace Engineering, and I buckled down.  I was determined to get the skills that would let me be part of the greatest adventure of our times.  Why did I do that?  Because of my passion for science fiction.  And because it rescued me.

As a child I was an uncertain and fretful; not the first young boy that happened to, but upsetting enough to me.  I did ok in school, and that mystified me, since I was sure I wasn’t as smart as the other kids.  I pretty much shied from a world that intimidated me.  Then one day when I was twelve a classmate loaned me a book with a strange title: “Angels and Spaceships”.  It was filled with short stories written by someone named Frederic Brown.  These were stories unlike any I had read, and they changed the direction of my life. 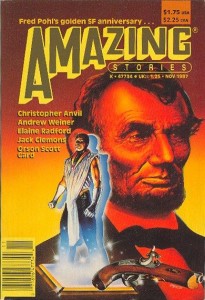 There were spaceships traveling between the stars, strange alien beings unmindful of humans; a planetary network of computers that declared itself God; an absentminded Supreme Being who wasn’t paying close attention to His business of running Earth.  These were outrageous ideas; they were dangerous.  They exploded and complicated my universe; they disputed my instructed beliefs; they offered unorthodox truths that made me queasy.  It was heady stuff. .

I went searching for more.  I found Ray Bradbury’s “R is for Rocket”, which brought space travel into the backyards of ordinary small town people.  And Robert Heinlein’s “The Green Hills of Earth”, which turned working class folks into space farers.  That was a future I could manage; a place where even a person like me could visit the stars.  And those things could really happen someday; it seemed like that’s where we were headed. The world I’d been afraid of became a place of adventure, and it dragged me in.

I got older and grew more certain of myself, but I kept reading science fiction and my imagination grew up with me.  Bradbury led me to “Fahrenheit 451”, Heinlein to “Starship Troopers”.  I found Alfred Bester’s “The Stars My Destination” and Arthur C. Clarke’s “Childhood’s End”.  These were darker tales of people with determination and resourcefulness working to overcome unimaginable peril.

By the time I left for college, I didn’t know where I was headed.  I understood that a degree was the key that unlocked many doors, but I wasn’t sure which ones I wanted to open.  I thought about majoring in writing – maybe I could become the next Clarke or Asimov.  And then John Kennedy challenged us, and I was electrified.  The future I’d imagined was already on its way.  And I could be part of making it happen! 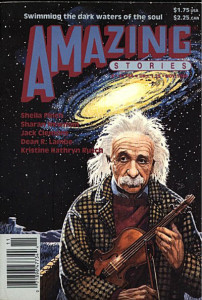 So we’ve been to the Moon and back nine times, and six times walked (or drove) on its surface.  We’ve launched a fleet of space shuttles and used them to build an orbiting multinational space station.  I even got to watch a rocket launch at sunset that was eerily like a scene from “R if for Rocket” as it backlit the clouds it passed through.  I live in a science fiction future that I actually helped build.  Now that’s really heady stuff!

Throughout my career I’ve worked with many professionals who, like me, embraced a life in science or engineering because they’d seen the future as Heinlein or Roddenberry or Gibson imagined it.  Our world of technological wonders and otherworldly adventures was largely crafted by people who were inspired by dreamers.  And so too will the next future be.