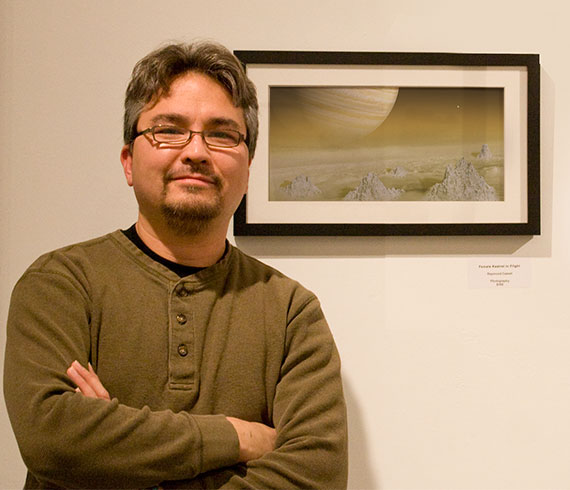 Greetings, my name is Raymond Cassel and I am an award winning illustrator and photographer. I have previously been published in Forbes magazine, the Denver Post, Rocky Mountain News, National Space Society, The Planetary Society and the book The Beauty of Space. Currently I am employed as a graphic designer for a Fortune 200 company in Colorado. I enjoy devoting some of my free time to creating space and wildlife artwork.

At a young age drawing spacecraft, robots and dinosaurs gave me the fundamentals of perspective, shading and composition. A book of concept sketches for the movie Star Wars led me to the realization that people draw robots and spacecraft as a profession. The works of Nilo Rodis-Jamero, Joe Johnson and Ralph McQuarrie inspired me to study Industrial Design at the Metropolitan University of Denver. During my time in college in my astronomy textbooks, I discovered and was greatly influenced by the scientific illustrations of Ron Miller and William Hartman. Their astronomical art brought to life scientific ideas in a real and tangible way. Other influences such as Syd Mead and Wayne D. Barlowe have helped to define my notions of art and design.

After college I started my career working in computer-based training creating illustrations and animations which included aviation. During this time I sharpened my 3D skills working in Lightwave 3D which then led to a graphic design job at a start-up aircraft company. At Aviation Technology Group Inc., I had the opportunity to utilize my industrial design education as part of a team designing a personal jet that resembled a jet fighter. Prior to development of the full-size mock-up, my aircraft illustrations were realistic enough that individuals were requesting to display the aircraft because they believed it was already available. The company achieved full development of a prototype aircraft (that had flown 8 times) before the economic climate pushed the company out of business.

During my short time out of work, I took the opportunity to use my 3D skills to create some of my first digital space art. One of my pieces was chosen for the cover of the National Space Society’s Space Settlement calendar. Part of the grand prize winnings was a year membership in the International Association of Astronomical Artists (IAAA) and I have remained a member ever since. I consider this very supportive group to be a great resource as they provide guidance and advice on artist technique, science, the business of art and exhibit opportunities. Some of the same individuals that have inspired me in the past are contributing to the advice and critiques.

Currently I am embracing technology by drawing on the iPad and also using organic 3D modeling tools to explore what other-worldly creatures might look like. I like to believe that the shapes of alien life will be strangely familiar, although evolution may create a different body plan by adding to or subtracting from the number of limbs we are accustomed to. The mechanics of walking, swimming, flying or burrowing might create forms that are very analogous to what we see around us. When it comes to space art, the universe is so vast that there is likely an analog for even the most fantastic ideas we as artists can conjure up.

The sand storm has finally ended. Despite the lower gravity, the weight of drifting sand is still problematic on our more delicate structures. As you can see we are starting the clean up on the greenhouses. Created using Lightwave 3D and Photoshop.

This image depicts one of a pair of settlements built on asteroids. The second, similar settlement is built on a nearby asteroid, and the two are connected by a tether. The second asteroid acts as a counterweight so that their rotation provides gravity to both colonies. Supplies are brought to the two colonies through a series of docking stations located at the fulcrum of the tether. Transports along the tether carry supplies and personnel back and forth. Created using Lightwave 3D and Photoshop.

This image is a companion piece to the above image and illustrates two asteroids counterbalancing each other as their spin provides gravity for two mining settlements orbiting Jupiter. Published in the 2009 National Space Society Calendar. Created using Lightwave 3D and Photoshop.

An alien herd crossing a river on a distant moon. Creatures sculpted in and textured in Sculptris, scene assembled and rendered in Lightwave 3D. Clouds added in Photoshop.

This is one of a number of colonies that can be found in Earth orbit in the distant future. The central core houses industries that take advantage of the zero gravity and microgravity conditions. A short tram ride “down” returns you to normal gravity. Created using Lightwave 3D and Photoshop.

The thick atmosphere on a distant moon shrouds the surface while a pair of stars hang in the distance. Photoshop, Lightwave 3D and Lensflare HD for iPad were used to create this piece.

The orbits of these two rocky planets have brought them closer and closer until finally they can’t escape each other and they become one. The planetary deformation was sculpted in Sculptris, and rendered in Lightwave.

This image was inspired by one of the photographs that Astronaut Chris Hadfield had taken from the International Space Station. The shots that were tweeted from space are amazing. I challenged myself to create my own version from a blank canvas on the iPad. This illustration was created using the Sketchbook Pro App for iPad by Autodesk. I also used the Pogo Connect bluetooth stylus by Ten One Design.

Mountains of water ice jut out of the thick atmosphere on a distant moon. Created using Lightwave 3D, Bryce, and Photoshop.

Plumes of frozen water vapor erupt from cone shaped geysers on a frozen moon in a distant solar system. this scene was built and rendered in LightWave 3D

In this depiction the planet is losing it’s atmosphere both by centrifugal force created by it’s rapid speed and it’s close proximity to the solar winds of the star. A vapor-trail follows the orbit of the planet and is pushed outward by the output of the star.This image is modeled and rendered using LightWave 3D. The solar flares sculpted in Sculptris. Photoshop was used to complete this image by enhancing the brightness of the star and painting in some of the atmospheric details.

NASA Prepares for Another “7 Minutes of Terror”