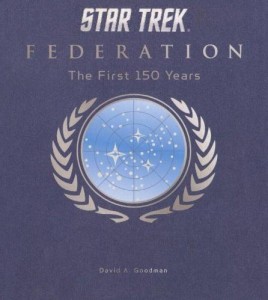 Fandom is born in the loyalty and dedication of the people that grew up in the realm of their genre. I know that is a bit wordy, but it is fitting when you talk about perhaps one of the most noted franchises in the vast universe of science fiction, Gene Roddenberry’s Star Trek. But even after all of the productions from television, film and countless works of literature, many fans still feel the need to somehow be a part of that which they love.

Titan Books recently published a beautiful piece that just may fill that need. Star Trek Federation: The First 150 Years by David A. Goodman has the look and feel of a high school yearbook. And in essence, minus the dorky collection of class members, it is.

Sure the book tries to take itself seriously, but so do the fans. This is a plus for the readers and devoted followers that tend to show the same compassion. The passage from the back cover illustrates the acute perspective of the book and is a good indicator for what is inside.

“This official unprecedented illustrated volume chronicles the pivotal era leading up to Humankind’s First Contact with Vulcan in 2063, the Romulan War in 2156, the creation of the Federation in 2161, and the first 150 years of the intergalactic democracy up until the year 2311. Meticulously researched, this account covers a multitude of alien species, decisive battles, and the technology that made the Age of Exploration possible. It includes field sketches, illustrations, and reproductions of historic pieces of art from across the Galaxy, along with over fifty excerpts from key Federation documents and correspondence, Starfleet records, and intergalactic intelligence.”

The illustrations are tastefully done and the documentation is as thorough as any historical records on the market. But what makes this work stand out in my mind is the unique perspective. Each page gives the reader a feeling that the book was actually created by people who were a part of the Federation. In the Star Trek world, it would have been mandatory reading for anyone interested in attending Starfleet Academy because it is weighted with the history and tradition that formed the backbone (and back-story) of the series.

It is obvious Goodman did his homework for this book. Admittedly, there may be a few discrepancies that muddy the thin line between loyalists of the Roddenberry tradition and those that follow the later visions from the likes of J.J. Abrams, but in the end Star Trek Federation: The First 150 Years is a fitting tribute to the long history of one of science fictions staples.