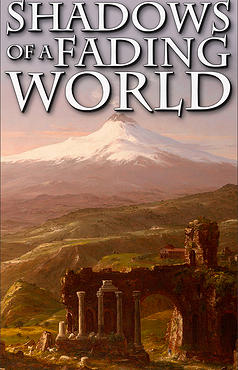 Shadows of a Fading World is the first anthology from Long Count Press. For a first anthology, it’s pretty impressive. It contains seven stories of varying length, mostly novelette/novella, set in the last days of the world. I’d only read the work of one of the authors, and of the remaining six, I only recognized the name of one of them.

“Severance” by Rhonda Eikamp is the story of a pair of warriors, one a sorcerer and the other a fighter, who have been magically joined to strengthen their abilities. Now the sorcerer is dying. They come upon a man in a whalebone cage along a beach who claims to be able to lead them to a cure. But he isn’t telling them everything. I especially enjoyed this one.

Robin Wyatt Dunn tells an unusual love story with “Fire Dancer”. This one was poetic, but I’m not sure I caught all the nuances. Still, I liked it. It’s also the shortest story in the book.

“Moonfall”, by Christine Frost, tells the story of what happens to a feuding family when the dragons leave and magic goes out of the world. A queen at war with her former husband must decided whether she can trust one of her sons when he shows up with a group of refugees following the collapse of everything after the magic leaves. It’s a good story, but it’s not self-contained. Instead it very much reads like the opening section of a novel, which left me somewhat unsatisfied because so much was unresolved. I’d like to see the novel.

In Neal F. Litherland’s “Paths of Iron and Blood”, a man attempts to rescue a group of kidnapped children that includes his own daughter. This one was a solid blend of science fiction and fantasy that didn’t follow well worn paths. It did its own thing, and I found that refreshing.

Ian Creasey is the name I recognized. In “Digging for Paradise” he gives us an archaeologist who has agreed to help a wizard retrieve a valuable stone. He needs the money to get his wife out of prison. The trip will be long, so the wizard puts the team in stasis until the reach their destination. The archaeologist awakens to discover that the trip isn’t to a distant land, but to the final days of the world, when the magic in certain stones has had time to recharge. Everything and everyone the man had known and loved is forever gone. And the wizard wants to use the stone the archaeologist is to retrieve to give himself unlimited power.

David J. West (no relation to me) is the writer whose work I’ve read previously. He rarely disappoints. In “The Serpent’s Root”, a young healer must retrieve the venom gland from a cockatrice to heal her sister and lift a curse from her house. The monster in this one was well-done.

The final story is “The Myroblyte” by Michael Mina. This is a dark and disturbing tale of a necromancer’s apprentice who seeks to restore is lover to life. He sees his chance when his master takes him to a holy city to steal the body of the avatar of a goddess.

All of the stories in this volume were of professional quality. Often in small press anthologies filled with relative newcomers that’s not the case. The stories here were at least as good as what you’ll find in an anthology from DAW or in one of the fiction magazines. None of the authors did anything fancy or experimental in their writing. Rather they focused on telling good stories. By and large, they succeeded and succeeded admirably.  I’d be glad to read any of these authors again.

Shadows of a Fading World is only available in ebook format. I had no complaint about the production values. The interactive ToC linked to every story. There were no odd things about any of the formatting: no weird page breaks or missing text.

Long Count Press has set a high standard for themselves with this anthology. Their second one is currently open to submissions. I’m looking forward to it.