Home Film/Televison Horror Film or Terror Film. Which is it? Karloff and Clarens Speak... 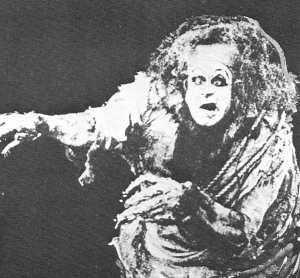 Good old Boris Karloff. Always loved that guy. So it’s a bit sad he disliked being labeled a “Horror actor.” He didn’t see himself that way at all. He made ‘Terror’ films, not ‘Horror’ films.

In 1962 when interviewed by Robert Bloch (of ‘PSYCHO’ fame) for ROGUE MAGAZINE, Karloff had this to say:

“Horror, I wish the movies had never found that label… There’s nothing pleasant, nothing appealing, about the word. It doesn’t promise entertainment.”

“You and I, each in our own way, have devoted a career to providing chills, shocks, shudders. But we’ve done so only to amuse—to fulfill the same function as the time-honoured teller of ghost-stories who offer a few cold shivers to his audience… But I’ll be blasted if either of us ever deliberately set out to HORRIFY anyone. All this violence and brutality today, shown against a ‘realistic’ background—now that’s downright horrible!”

“What about FRANKENSTEIN?” Bloch asked. “Don’t you call that a horror movie?”

“Certainly not! Weird—supernatural—but essentially and obviously a fable.”

In 1966 he stated the following to Peter J. Jarman for FAMOUS MONSTERS OF FILMLAND:

“…there is a modern tendency with the so-called horror film—and I prefer the word terror to horror—to introduce shocks just for their own sake. This I believe to be wrong. Shocks should evolve naturally from the situation and story. They should not be forced into a film without excuse.”

I figure Karloff speaks with authority, more than most critics I’d say.

But when I was a teenager in the 1960s such subtle distinctions were beyond me. I just knew I liked ‘monster’ movies, preferably science fiction films with alien monsters, though, thanks to SHOCK THEATRE, I had a soft spot for the old Universal Studios critters.

I was operating out of ignorance (as is my wont) which is hardly surprising since my only source of information, apart from the occasional newspaper movie review, was FAMOUS MONSTERS OF FILMLAND and its imitative competitors. Horror films were schlock. Everybody knew that. 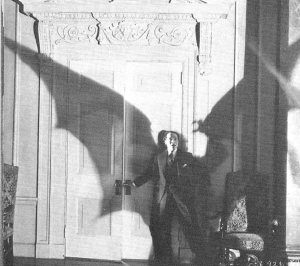 Words cannot convey my thrill when I discovered a 250 page hardcover book AN ILLUSTRATED HISTORY OF THE HORROR FILM by Carlos Clarens, Putnam, 1967. An honest-to-Ghu scholarly study discussing themes, trends, directors, studio economics, actors, critical response and much else besides, as if horror films were a legitimate business and artistic phenomenon with a complex and subtle history. As far as I’m aware this is the FIRST serious study ever published.

(Note: I include a selection of movie stills from the book. Can you identify the films? Answers at bottom.)

Not surprisingly, Clarens is at great pains in his introduction to justify writing the book:

“Unlike the Western, the horror film has not yet attracted sufficient critical attention. And yet the latter offers a variety of emotion and a degree of involvement that the former, with its Manichaean simplifications, simply lacked.”

I had no idea what he was talking about, but the implication that horror films were somehow superior to Westerns filled me with glee. At last I could point to something in print to justify my tastes.

Mind you, whenever I literally pointed out the above quote in the book my friends usually replied, “Yeah. So what? Who cares?” but I felt vindicated nevertheless. 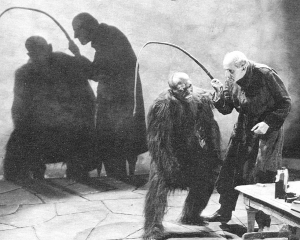 Clarens both agrees and disagrees with Karloff. He describes horror films as “the art of terror” serving a useful cathartic purpose, providing us with the means to confront and overcome the darkness which exists within us all, a darkness which never leaves us, a darkness we usually suppress. For him the function of horror films IS to horrify us, but to good and healthful purpose.

Not that that is the primary motivation of the studios:

“…movies follow popular taste or at least try to, inasmuch as they are products of an industry, and are bound to reflect something of the unconscious of their audience… a film may hit a very definite chord in the public mind and still not be distinguished on any other terms. This could go some distance toward explaining the lack of critical attention or contempt of the critics for the horror film.”

“It is asking a lot to be moved or shocked in the comfort of one’s own home, where the cognizance that one can escape to the next room instantly dissolves tension.”

This is his excuse not to discuss the impact of horror films on TV audiences. I don’t know. As a little kid home alone I was genuinely terrified by the golden oldies shown on SHOCK THEATRE. But then I was sitting close to the screen, determined to absorb as much of the creepy ‘atmosphere’ as possible, so in a sense I was an excessively willing participant. Nowadays, sprawled on the couch, swilling beer and munching on snacks, not so much.

The first three chapters are devoted to silent horror films from 1895 to 1928.

German films for instance, which Clarens declares are derived from the ‘Schaurromane’ or ‘shudder novels’ which contained a “malignant catalogue of necromancy, diabolism, catalepsy, vampirism, and unbridled sensuality.” These themes, combined with contemporary expressionism, led to the creation of the ‘Schauerfilme’ genre of fantasy and terror films.

In other words, many German silent horror/terror films were based, at least in mood and theme, on critically acclaimed and popular literature, so it is not surprising they received a similar reception when they first appeared and remain highly regarded even today. That horror films had ever been looked upon as praiseworthy was a pleasant shock. I hadn’t known that!

I was further blown away by the sheer volume of films described. I’d heard of a few of them, but seen NONE of them, apart from a few stills in magazines. I assumed I’d NEVER see them.

Today I OWN copies of ‘NOSFERATU’, ‘METROPOLIS’, ‘DER GOLEM’, ‘THE CABINET OF DR. CALIGARI’, ‘DER NIBELUNGEN,’ ‘FRAU IM MOND,’ to name some of the less obscure films, and have at least seen most of the others Clarens writes about, like ‘THE STUDENT OF PRAGUE, ‘HOMUNCULUS,’ ‘THE SPIDERS,’ and so on . Back in 1967 all I could do was read about them and fantasize what it would actually like to watch them. I’m not a big fan of the twenty-first century, but I must admit I like my high-tech access to films of yore. Wonderful thing, films. You can tell I like them. 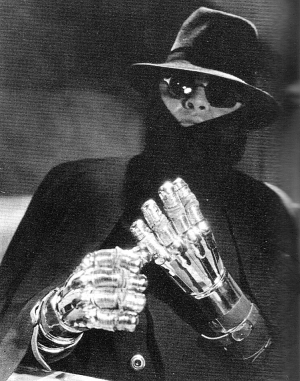 American silents, on the other hand, avoided ‘Schaurromane’ elements except when exhibiting the wages of sin (not for titillation of course, but in order to demonstrate how contentedly worthy a dull and boring life is by comparison). European films were a kind of combination Greek tragedy and roller coaster ride. American films were out to save your soul.

I was amazed. It was possible to think about films as well as simply watch them. Son of a gun.

Still, I had, possibly without thinking, already developed opinions. Everybody ‘knew’ American films were mostly good guys triumphing over bad guys, and European films were dreary, incomprehensibly artsy piles of angst where the good guys seemed about as bad as the bad guys appeared good, at least to my 16 year old brain. Seems I wasn’t born to be a film critic.
But at least Clarens got me thinking. Different cultures/nations had different agendas underlying their films. Wowzers!

In fact he went so far as to deny there were any ‘true’ American silent horror films whatsoever, that, apart from classic morality fables like THE HUNCHBACK OF NOTRE DAME, ‘horror’ elements began to creep in because of the influence of mystery genre stage productions like THE BAT and THE CAT AND THE CANARY. This ultimately led to what critics termed ‘chiller’ films after the introduction of sound.

Yet the films of the ‘30s and ‘40s were different from the silent era movies, in that they tended to avoid the supernatural; creatures like vampires and werewolves were portrayed as ‘real’ dangers that had been hidden and protected by ‘myth’, and the Frankenstein monster and other artificial creations were the product of ‘science’ however demented. The rational had entered the realm of horror. Fine by me. 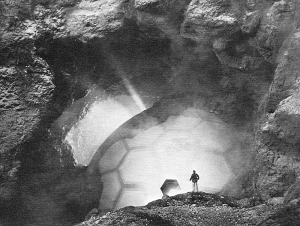 Even better, Clarens points out American horror films now reflected the influence of German ‘Schauerfilme’ not least because of the sheer number of German and British actors and directors living in Hollywood. Visually, the spate of Hollywood horror films in the .30s and ‘40s were decidedly ‘un-American.’

Actually, it came as a considerable shock to me, once I discovered the pages of FAMOUS MONSTERS OF FILMLAND, that these films WERE American. Watching them on SHOCK THEATRE I had taken for granted the European settings, the seemingly endless supply of British actors, and what to me struck me as obviously European set design PROVED these films were magnificent examples of British cinematic art. Even worse, I actually believed interior shots of laboratories and what not had been sets filmed inside GENUINE castles.

I was quite the twit when I was young (some say even now).

In chapter seven “Keep Watching the Sky” where Clarens talks about the science fiction films of the ‘50s and ‘60s, and why shouldn’t he? They contained horror elements, namely monsters (the best bits methinks).

I love and cherish his statement: “Science Fiction, the one literary genre to have flourished since the war…”

Great Galloping Ghu! This guy was amazing as a film critic, but evidently FEROCIOUS as a literary critic! I’m sure most, if not all, modern literary critics totally disagree with the above statement by Clarens but I’m going to quote it as often as possible no matter how much it annoys people, or maybe precisely BECAUSE it annoys people…

“Quality takes second place to quantity and their staggering flow, lack of press coverage or even of advertising in the daily newspapers (not to mention the dismayingly low level of craftsmanship in most of them) make it well-nigh impossible to cover the genre thoroughly.”

“…one may have seen TERROR FROM THE YEAR 5,000 or even THE UNDERWATER CITY, but who can claim such devotion to film research as to have sat through THE SPACE CHILDREN, WAR OF THE SATELLITES and ATTACK OF THE FIFTY FOOT WOMAN?”

Well, ME for one. On first reading this chapter almost fifty years ago I began to doubt Claren’s sanity, never mind his judgement. Wasn’t he aware the secret of enjoying films is to lower your expectations as low as possible? Huh, some film critic. Bit of a fraud.

“…science fiction films lose the timeless preoccupation of the horror film and rise and fall with the trends of anxiety: THE MAN FROM PLANET X may be negligible, but the flying saucer scare was not.”

Academic yet accessible, Clarens’ book was groundbreaking. Read it! 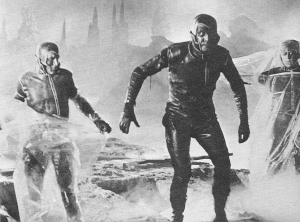 To conclude: Was Karloff right? Horror films should be called terror films?

My idiot dictionary defines “horror” as a state of terror, and “terror” as extreme fear. Fat lot of good that does me as far as this column goes.

It doesn’t matter. I choose the Lovecraftian approach. If the mood and feeling and fearful sense of anticipation sends chills racing up and down my spine, it’s a genuine horror/terror/ripping-good-yarn sort of film. That’s all I ask.

I leave the subtle distinctions and definitions to today’s actors and critics. Me? I just like the stuff.