Things have been rather hectic for the last few weeks.  Nothing bad.  Events have included, but not been limited to, my parents 50th wedding anniversary, going to camp with my son as a sponsor, my son getting braces.  Like I said, nothing bad.  Just time consuming and exhausting.

It’s not over yet, either.  There are a few more travel events between now and July 4th before things quieten down.

I’ve found it difficult to find time to read.  It took me over two weeks to finish the last novel I read.  Usually that ratio is reversed.

So rather than having a review for you, here are a couple of titles that I will be reading and reviewing over the remainder of the summer.

First, the concluding volume of Joshua P. Simon’s Blood and Tears Trilogy, Trial and Glory.  I reviewed some of the shorter works associated with the series as well as interviewed Mr. Simon last year.  If he maintains the quality of the previous works, and I have no reason to doubt that he will, Mr. Simon will have written a solid work of military fantasy that will appeal to fans of Glen Cook. 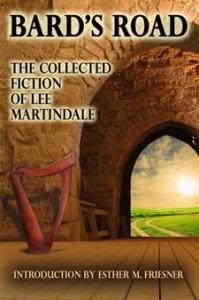 After that is another fantasy, this time a short story collection by Lee Martindale.  Ms. Martindale is an editor and short story writer, and Bard’s Road collects all her short fiction to date.

I’ve got a few other things planned after that, but I’ll keep them under my hat for now.  I’m not sure what will come after that.