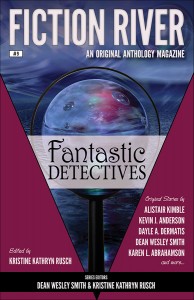 I wrote several posts last year that revolved around crowdsourcing as a publishing model. I started with discussing ways in which that model would work. Then I interviewed Kristin Kathryn Rusch, who was using such a model to launch the anthology magazine Fiction River. Finally, I reviewed the first issue.

Well, Fiction River has been such a success that it’s into its second year, and Rusch and her husband Dean Wesley Smith have plans to continue beyond that.

One of the things I like about Fiction River is the diversity of themes. Take for instance the next issue to be published. It’s titled Fantastic Detectives and will be available sometime in September. (I’d like to thank Jerimy Colbert at WMG for the advanced review copy.)

This issue of Fiction River contains 11 stories, including a novella in Dean Wesley Smith’s Poker Boy series. The stories here range from dark to ones that made me chuckle. (Getting me to laugh out loud is extremely hard.) Let’s look at the contents.

The book starts off with “Case Cracked” by Joe Cron. It’s one of the funniest things I’ve read in a while. It concerns Frank Dumpty of the Magic City police force. You may have heard of his late brother Humpty. (Cron tells us how he came to have the nickname Humpty. Congratulations, Mr. Cron. You’ve done what few have been able to do, get an audible reaction to a joke.)

Dayle A. Dermatis has her series character Nikki Ashburne help the ghost of a Marilyn Monroe impersonator locate a lost relative in “Living with the Past”. There is a lot of potential in the idea of someone who attracts ghosts in Hollywood.

In “All She Can Be” by Karen L. Abrahamson, Vallon Drake is an agent for the American Geological Survey. It’s part of her job to see that the maps don’t change. On her first field assignment she learns that just because someone works for the same organization doesn’t mean they have the same agenda on an assignment. This is another series character.

A young girl discovers there is a subbasement to the cellar in her family’s winery and furthermore it’s occupied in “Under Oregon” by Kara Legend. She also learns the cost of protecting your family can come high.

Kevin J. Anderson has written a number of series and stand-alone novels over the years. One of his recent series concerns Dan Shambles, PI. In this one, Dan has to unmask a killer at CosplayCon in “Role Model”. This one was a lot of fun.

“Death in Hathaway Tower” by Ryan M. Williams is an old fashioned, well-structured whodunit, somewhat along the lines of Agatha Christie. Only with elves and shapeshifters. I echo editor Rusch’s desire to see this one be the first of a series.

Alistair Kimble introduces two characters from a forthcoming novel and shows us their first meeting in “Trouble Aboard the Flying Scotsman”. One of the characters is human, and the other…isn’t. I have a feeling that the human character, Harland Stone, isn’t going to be getting much rest anytime soon. He certainly didn’t in this one.

The stories in Fiction River (any volume) were written months in advance of publication. So I am fairly certain Paul Eckheart wasn’t thinking about the Ebola outbreak when he wrote “Containing Patient Zero”. But I was certainly thinking about it when I read it.  I’m glad this one is fantasy.

There are a number of people who are fans of mysteries where the detective is an animal. I am not one of them. (I’ll allow for the possibility that I’ve not read the right stories in this subgenre.) So while Juliet Nordeen’s “Canine Agent Rocky Arnold vs. the Evil Alliance” wasn’t my cup of tea, I can see how it would be just the thing for a lot of readers. The story (which concerned some scheming on the part of coyotes and rabbits at a dog park) was well done and will appeal to fans of this subgenre. And I would certainly be willing to read more of Ms. Nordeen’s work.

Kristine Kathryn Rusch also uses an animal detective, only this time a cat, in “An Incursion of Mice”. This one is also extremely well done and will appeal to fans of the animal detective subgenre. Rusch is one of those writers who can add layers to a story at shorter lengths, and she does so here.

Dean Wesley Smith started an experiment last year that I’ve not seen anyone else do. He’s writing his own monthly fiction magazine, Smith’s Monthly, with a novel, a serial, short stories, and articles. I’ve not read it yet. (Cash flow and time restrictions.) I have read quite a bit of his work, and one of my favorite characters is Poker Boy. Poker Boy is a superhero who works for Stan, the God of Poker, who in turns works for Lady Luck. Poker Boy is always saving the universe. It’s a wonder he ever gets to play poker. “They’re Back!” is a stand-alone sequel to a Poker Boy novel that recently appeared in Smith’s Monthly. I’ve always found the Poker Boy stories to be smart, clever, and a whole heckuva lot of fun. This one concerns soul stealing slot machines and is no exception.

This is another solid issue of Fiction River. This is the 5th issue I’ve read of this anthology series. (The issues are one, three, four, and special issue one. Click for reviews. The others I’m trying to get to.) I’ve noticed a couple of things that are true with regards to Fiction River.

First, the wide variety of fiction. Even themes that seem to be pretty narrow turn out to be otherwise. Each issue has a wide variety. The styles, tones, and blending of genres is widespread.

Second, the consistency. The writing is always professional level, well edited, and entertaining. Granted I’ve not read every issue, but the ones I have are all consistently high quality. I can’t say that about many publications.

Third, I always discover new authors. Fiction River blends new and top authors together. My list of people to watch for keeps growing. Related to my previous point about the writing, it’s sometimes hard to tell the newcomers from the old pros.

Fiction River Fantastic Detectives is a great read if you like to blend mystery with your fantasy. Check it out. It will go on sale sometime in September. Subscriptions are available in case you tend to forgetfulness and don’t want to miss this issue.