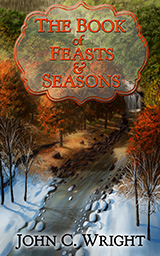 This week I’m reviewing a title that’s seasonal in nature, although the seasons it deals with occur across an entire year rather than a small part of the year. I’ve not read much of Mr. Wright’s work, but what I have has been better written and more original than much of what’s currently being published.

The same is true here. These stories have a great deal of depth, both in the characters they’re about and the concepts with which they deal.

Wright is a Catholic, and as a result the holidays and feasts he focuses on tend to be religious ones or have religious aspects. There are ten stories here. I’ll focus on the ones that resonated the most with me.

Wright opens with New Year’s Day. “The Meaning of Life as Told Me by an Inebriated Science Fiction Writer in New Jersey” sounds like it should be a Harlan Ellison story. Which is quite appropriate since Ellison is one of the characters. So are H. G. Wells, Olaf Stapleton, and A. E. van Vogt. It seems that what these three men wrote was actually fact thinly disguised as fiction. This is something Ellison reveals to Wright (yes, he’s a character in his own story) one night in a bar in New Jersey.

I should point out that this is the first story in the collection that directly involves the time machine as H. G. Wells described it. Wright has a fondness for time travel stories, and after reading City Beyond Time, I have to say he writes some of the best.

Time travel is central to “Queen of the Tyrant Lizards”, although the time travel isn’t of the Wellsian variety. (The holiday associated with this story is Epiphany.) Here a woman travels back in time, falls in love, and sees her betrothed gunned down by the KKK during the ceremony. It’s an interesting counterpoint to “If You Were a Dinosaur, My Love”. That’s all I can say without committing spoilers.

The story for Good Friday is “Sheathed Paw of the Lion”. The story is structured as a message a person on a deep space mission leaves for those who will wake from cold sleep after him. He’s summarizing events on Earth for them. The US has been conquered by an Asian dictatorship, one in which scientific investigation is forced to submit to political decree. And so are the alien visitors who show up.

“Pale Realms of Shade” (Easter Sunday) involves a murdered occult detective trying discover who killed him and why. This one had overtones of Dickens’ A Christmas Carol, in that the detective moves through both the past and the future and is forced to examine just what sort of a person he really was in life.

“The Ideal Machine” is the subject of the story for the Feast of the Ascension. Here, aliens visit Earth and provide a machine that can do pretty much anything, but with a cost. The only person who can use it safely is a young girl in China, something one soldier discovers when an old priest gives him the machine.

“Nativity” concerns Advent, and is one of the longer stories in the book. It’s another time travel tale, this one concerning a man who has literally just buried his wife who gets an opportunity to use Wells’ time machine. Does he go back to see her or try to save her from the cancer that killed her? No, he goes somewhen else altogether.

The final story, “Yes, Virginia, There is a Santa Claus” is set on Christmas Eve and also deals with death from cancer. In this case, it’s a small girl. In her grief, the girl’s mother Virginia wanders over to the department store across the street and notices a very unusual looking Santa in the window display. Or rather she sees Saint Nicholas. This one also had a strong Dickens vibe.

There were some other stories, but these were the ones I liked the best. (For the record, I liked all of them, just not equally.)

As I stated earlier, Wright is an author who isn’t afraid to delve into deep topics. Some of the themes here dealt with the nature of God, forgiveness, kindness, racism, sacrifice, and second chances. A number of authors these days try to deal with serious themes and issues in their fiction. Few are as accomplished or as entertaining as Mr. Wright.

The Book of Feasts and Seasons is one of the best and most thought provoking books I’ve read in the past year. I highly recommend it.

The production values of the book were good, but I did have one quibble. I’ve read other titles from Castalia House, and they generally do a good job of copy editing. There were a number of typos scattered throughout this book, however. Many of them looked like one verb had been substituted for another without the original word being removed. Everything else was fine. The cover illustration is great. The links in the table of contents took me where they were supposed to.