A collection that is not to be missed! 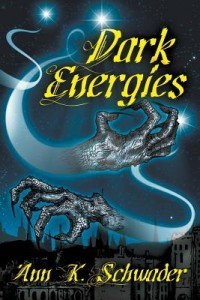 Ann K. Schwader is a very talented, award-winning poet (SFPA Rhysling; Bram Stoker Award finalist – this collection this year and previously). Her most recent offering, Dark Energies, from P’rea Press (ed. Charles Lovecraft), is her seventh poetry collection and is what we have all come to expect of this formalist poet and more. It is a (not too) slim volume of “dark cosmic poetry”, which collects her poetry from the past 4 years plus 3 from the early aughts as well as brings us a few brand new ones. It also includes a preface by S.T. Joshi and an afterward by Robert M. Price – respected names in dark poetry. The publisher, Charles Lovecraft, also includes an interview with Schwader. All of these extras to the poetry serve to not only illuminate the origins or backstory of some of the poetry, especially for those of us (ok me!), who haven’t read everything written by H.P. Lovecraft, but to praise the work as well.

As is most likely well known, Ann K. Schwader is one of the unequivocal masters of formal verse, at least among speculative poets. This collection, however, shows the sheer variety of forms that she does, in fact, master. There are sonnets (with various rhyme schemes), to be sure. But also villanelles, haibun, sestinas and likely other forms I can’t name. I have a difficult relationship with formal verse. I’m drawn to it, because I’m a bit of a masochist, but it takes work and patience to grasp the fullness of it, so it always scares me a bit. However, Schwader 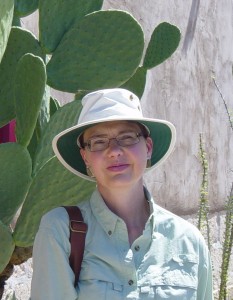 makes that work pleasurable and rewarding. Her rhymes and rhythm are never stilted, and while the sense of a sentence may at first be obscured by the rhythm and rhyme of the form, a second reading always unlocks the door. I can never decide which way to read a poem first: ignoring the line-breaks and going for sense or to read it for the musicality. At any rate, I usually do both with Ann and am always rewarded (kind of like Pavlov’s Dog). Line after line is a tiny work of art, which as a whole is nothing short of mind-blowing. It is therefore highly recommended that one savor this collection, reading each poem slowly and multiple times. It is worth it.

As is also expected of Ann K. Schwader the subject matter circles around Lovecraftian themes, but these themes are often interwoven with another great love of hers: astronomy. That’s the “cosmic” element in her dark poetry and it is delightful. She, herself, calls it dark SF poetry.

Schwader often writes haiku on current astronomical events. You can read many of them on her website “Yaddith Times.” Here for your listening pleasure is a longer poem (a Villanelle) which combines modern astronomy/space exploration with Lovecraftian ideas:

When I was studying music at the University of Wisconsin – Madison we learned about early music history and what the Greek philosophers, notably Pythagoras and Plato wrote about music. There was the concept of the “Music of the Spheres” and I have loved the idea of the heavenly bodies forming some immense orchestra, which cannot be heard with human ears, but is there nevertheless. It was Pythagoras who discovered that our western musical system is governed by mathematical ratios and these early philosophers combined the mathematical measurements of the planetary system and that of music to create this “musica universalis” Ann Schwader has given me a wonderful gift with the following poem:

This collection, more than much of Schwader’s previous collection, Twisted in Dream, doesn’t require an in-depth knowledge of the poetry and mythos of H.P. Lovecraft and other writers in that tradition. It probably adds depth and wonder to the poems, but appreciation and application are not dependent on it. Schwader’s skill is such that from the first few lines of a poem the universe is fully wrought and has drawn you in – it matters not if you do not know the backstory.

Ann has taken several female characters and entities from the Lovecraft mythos (Lavinia, Keziah Mason, Mother Hydra and the “canine” ghouls she made matriarchal hyenas) as well as creating one of her own (Ammutseba) and has given them the opportunity to express themselves more fully.

Listen to this sonnet about the character Lavinia Whateley from The Dunwich Horror, by H.P. Lovecraft. If you are unaware, she summoned “Yog-Sothoth” (a Lovecraftian Cosmic Being/god), who then impregnated her:

Sestinas are one of my favorite forms. The idea is that you take 6 words, which appear at the end of each line and appear in a different order in each 6-line stanza (the last word of each stanza appearing at the end of the first line of the following stanza. The final tercet includes all 6 words, two per line, usually one in the middle and one at the end. Listen for these words – darkness, hunger, stars, corruption, ancient and daughter/s – in this poem about Ammutseba:

There are so many more poems I would’ve loved to record! Every time I record Ann’s poetry, it gives me the opportunity to spend more time with them, to dissect them, to attempt to give them a reading, which does both the poetic form and the content justice. And especially with this collection, I’m moved to upgrade my rating of it on Goodreads to 5 stars (from 4)! If you’d like to hear me reading more of Ann’s poetry, you can do so on StarShipSofa where there are single poems as well as poems within Poetry Planet.

In short, this collection is not to be missed! The publisher, Charles Lovecraft, tells me there is some coding error on international shipping (outside of Australia – as of 3/2016) and one should just contact him through the website to order: http://www.preapress.com

A Bit of News

I have always felt that SHIELD was the most interesting part of Marvel Comics. The reality of Disney’s production, however, has left me sad and very disappointed.

Anime is not intended as a definitive guide, but as wide ranging introduction to the field. Even so, seasoned anime watchers will find the book valuable for the opinions expressed