Back in the 1970s, when drawing paper was scarce enough that it was used as currency in our household, I filled a fair amount of it with pictures of the star ship Enterprise. The first thing that struck a child about Star Trek was the physical: the spaceship, the phasers, the communicators and so on.

Whatever flare for dr 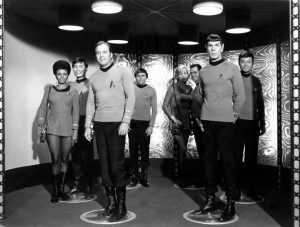 awing I might have had then has long since fallen away, but my affection for Star Trek has remained. And that’s surely because there was something more than hardware drawing me to the show.

There were the memorable characters, of course (Gene Roddenberry had the great idea of having action, thought and emotion each embodied in one of the three principals). And there were, if I’m being candid, the impossibly glamorous women. But most of all there were the ideas. At its best, classic Star Trek dramatized bold ideas and moral dilemmas so vividly that it lives on in the memory like no other show.

The writers of Star Trek did something incredibly hard: They created stories that appealed instantly to small children like me, yet were weighty and sophisticated enough to be picked over by adult audiences too – and to bear fifty years of scrutiny by the most discriminating fandom in the world.

Long may the dissection, the arguments – and even the nit-picking – continue.