Before I proceed to extol the virtues of the four William Tenn stories that I have picked out for you in this edition of Scide Splitters, I want to revisit the first of his stories that I featured in this blog. In the context of the ongoing culture war and the commotion it was causing in the Hugo Awards, I noted that “The Masculinist Revolt” was in many ways more relevant in 2015 than it was when it was written in 1961. Eighteen months after I wrote that, the November election made the story seem almost prophetic. The gender war in the story culminates with a contentious presidential election between a man and a woman in the twenty-teens (yep, the decade we are living through now). If I have piqued your curiosity enough to seek out “The Masculinist Revolt,” be aware that the story is satire and prone to misinterpretation just as Jonathan Swift’s “A Modest Proposal” was back in 1729.

It bears repeating that William Tenn (pseudonym of Philip Klass) was, in my opinion, the best short form political satirist Science Fiction has ever produced. Many of his stories fall into the category of Dark Comedy and several of them were controversial (“The Masculinist Revolt” is still controversial enough that anthologists are probably afraid to touch it). But not all of his humorous stories are as heavy as say, his anti-war classic “The Liberation of Earth.”

This month, I want to highlight four of his lighter pieces. Not that things necessarily end well for the protagonist in all these stories, and not that these stories are devoid of underlying serious issues, but they can be read just for fun without engaging the partisan mind.

“Party of the Two Parts” – This may be Tenn’s most laugh-out-loud, funny, short story. An ameboid alien with 2,343 felonies to his credit is on the run from the galactic police and hiding out on Earth. In an attempt to refuel his ship, he sells ameboid pornography to a teacher, resulting in a complex legal battle and a big headache for the commander of the local space patrol. I love this story. If it does not make you laugh, I don’t know what will. And don’t worry about the pornography, there is nothing more salacious here than ameba reproduction. 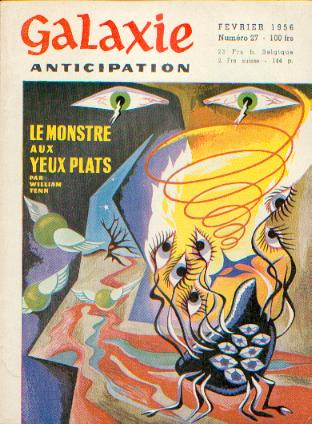 “The Flat-Eyed Monster” – A man finds himself transported across the universe as the result of an alien experiment. He wakes up in a laboratory surrounded by slimy, tentacled, suitcase-like aliens. After he escapes the lab, he sets out to steal an alien spaceship in order to get home. The story plays out like a clichéd monster story from the pulps and movies of the 1950s, only in this case, the human is the monster. This is a fun parody that does an excellent job of showing what it might be like to be the monster in all those pulpy stories.

“Lisbon Cubed” – Alfred Smith checks into his hotel room in New York and is mistaken for the Mr. Smith who had been renting the room before him. When four people show up at his room talking about being spies from another planet, he thinks they are playing a big city joke on the out-of-towner. That is until one of them opens his chest to reveal a spider-like creature controlling the body. Deciding that nobody will believe his story, Mr. Smith takes it upon himself to save the world.

“On Venus, Have We Got a Rabbi!” – A Jewish TV repairman on Venus tells a reporter about the events surrounding the First Interstellar Neozionist Conference held on Venus in 2859, and of the important role the local rabbi played in the High Rabbinical Court. The story explores both Jewish history and what it means to be a Jew. Can a lumpy brown pillow with short gray tentacles from Rigel IV be a Jew? To find out, you will have to read it. You want I should spoil the story?

All of the above-mentioned stories can be found in Immodest Proposals: The Complete SF of William Tenn, Volume 1 published by NESFA Press. It contains thirty-three short stories, each with an afterward by Tenn explaining the origins of the story. Incidentally, the similarity between the title of this collection and Swift’s satire mentioned above is not coincidental.