With a well scripted story intertwined with unique audio special effects, Brad Lansky and the Result War is one of those rare experiences that modern fans of science fiction should try. 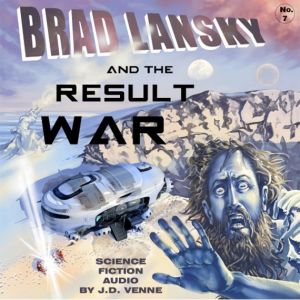 The latest installment of the escapades of space explorers Brad Lansky and Alex John is now out, available from Protophonic Productions. Brad Lansky and the Result War by writer J.D. Venne picks up where Rogue Era left off, answering a lot of questions and opening up a few more.

Earth is in an elliptical orbit following a rogue planet’s near miss of only a few thousand kilometers, nudging our planet inward toward the Sun and much closer to Venus. The harsh environment arising from extreme weather changes, unbearably cold winters and insufferable heat during the summers, has humanity looking for answers from the G.A.I.A. (General Artificial Intelligence Assembly), a collective of A.I.’s throughout the Sol System.

After it is discovered that someone is hacking and manipulating the mind of off-grid human friend Dr. Brinn Diaz, Brad and Alex find themselves at an outpost in Antarctica facing alien lifeforms they’ve never encountered before and embroiled in a mystery that could change humanity forever.

Each episode is a stand-alone story that follows our heroes, so you can jump right in with number 7 – Brad Lansky and the Result War or go back and experience the journey in chronological order.

No. 1 – Brad Lansky and the Alien Planet

No. 2 – Brad Lansky and the Alien Engineer

No. 3 – Brad Lansky and the Face of Eternal

No. 4 – Brad Lansky and the Anti-Starc

No. 6 – Brad Lansky and the Rogue Era

No. 7 – Brad Lansky and the Result War

Protophonic advertises that “the pictures are better in sound” and encourages listeners to fully absorb the story by relaxing comfortably with quality headphones. The acoustic effects are both impacting to the experience of the drama as well as lengthy distractions at times. But the strength of the voice actors it what helps tie the emotion of the story with the audio imagery, allowing the listener to receive the most satisfaction, reminiscent to the old broadcasts of the golden age radio.

With a well scripted story intertwined with unique audio special effects, Brad Lansky and the Result War is one of those rare experiences that modern fans of science fiction should try.

The cast of Brad Lansky and the Result War include:

Production credits for Brad Lansky and the Result War are listed as:

Book Review: A Secret History of Witches by Louisa Morgan

Space Brothers #57 – Everyone caught that piko-piko is the Japanese onomatopoeic equivalent to “beep”, right? So we all know how the author picked Pico’s name? Well then, let’s talk about a slightly less obvious one: Takio Azuma, one of the astronauts coming up to take the next shift at the moonbase. He’s almost certainly […]

Steve reviews a reboot/remake of Tomb Raider (really?), and a quick look at a semi-genre film called I Kill Giants. What the heck is semi-genre?